The Growth of the Park 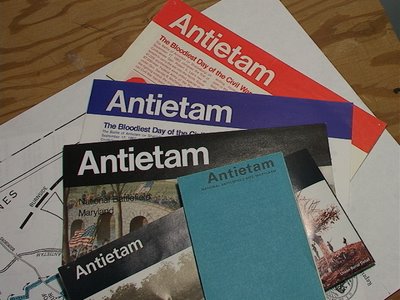 I recently unpacked the Antietam brochures that I've been collecting since I first visited the battlefield with my father in 1968. A comparison of one to the next, to the next, is both instructive and very encouraging. 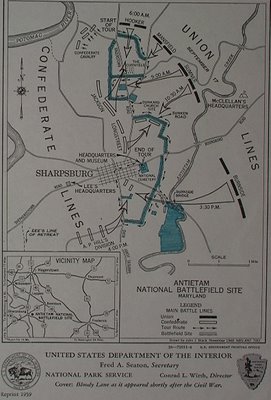 This brochure was recently given to me by someone a little older than me. The map of 1948 (reprinted in 1959) depicts a park not much larger than the original authorization of 40 acres, including the National Cemetery. Originally the park consisted merely of the cemetery and the right-of-way along the battlefield road (in blue). This tiny footprint was later slightly enlarged to include the fields south of Burnside's Bridge. Note that the Hagerstown Pike still zoomed right through the heart of the Dunker Church/Cornfield area. Burnside's Bridge was still open to vehicular traffic at this time and the bypass around the bridge did not yet exist. The Cemetery lodge still served as headquarters, museum, and visitor's center. This was the period when the Dunker Church rose again, in its original location, with much original material, just in time for the Civil War Centennial. 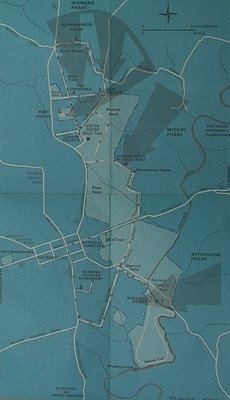 The tiny, blue brochure of 1972 (revised 1975) shows what remarkable changes had occurred; The highway bypass now routes Hagerstown-bound traffic around rather than through the park. Similarly, motorists no longer cruised over Burnside Bridge; a bypass was built to skirt it.

Note the still-skeletal nature of the areas around the Cornfield and Branch Avenue. Otherwise quite a lot of acreage had been added including the Mumma, Piper, and Sherrick farms. By this time the  visitor's center had been built. Other visitor amenities included a picnic area near Philadelphia Brigade Park and a nature trail. 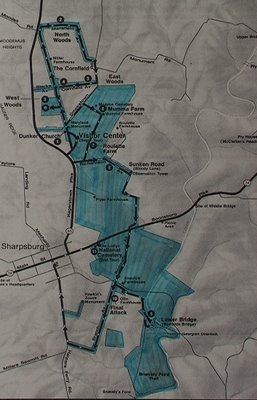 The blue (later red) brochure of the 1980s. This map premiers the tour route in use today with stops 1 through 11 just as visitors still encounter them.

The Cornfield and Branch Avenue retained their War Department-days appearance but The Otto House, Pry House, and Roulette Farm had been acquired. The former nature trail evolved into the Snavely Ford Trail. 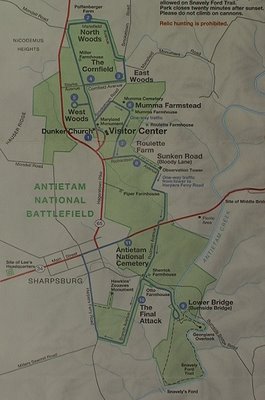 The Park welcomed the Poffenberger farmstead with this 1995 map. And look at the growth! The battlefield now extends across the 65 to the base of Hauser Ridge. The North Woods is included in the footprint and the West Woods is finally, and securely in Federal hands (get it?). 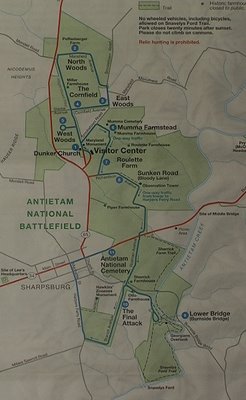 The 2003 map sees the addition of the fields to the east of the Sunken Road a huge tract extending to Antietam Creek, just as the Pry House acreage now extends westward to the creek.

The Sherrick Farm Trail has been established and land is acquired along Mondell Road nearly to the base of Nicodemus Heights. 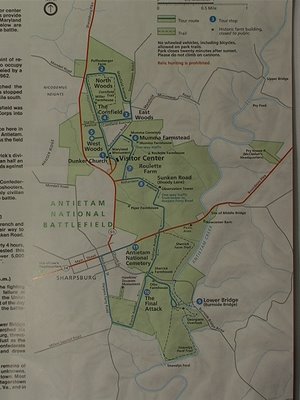 The 2004 printing shows the welcome addition of the Cornfield trail.

How ironic that the scene of America's greatest calamity 151 years ago is now such a peaceful and agreeable place, with so many diverse people and interests working toward the same preservation goal. 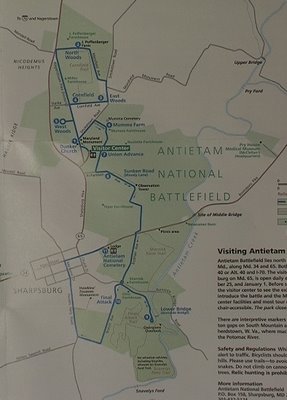 Finally, a look at the current brochure

In the Antietam Creek Valley lots of good people and organizations are working together, every day, to preserve this battlefield and the memories of those who sacrificed so much for all of us.

Come visit (and save your brochure).

Ranger Mannie
Posted by Unknown at 11:34 AM