For the Colors: Flags at Antietam
by Park Ranger Keith Snyder 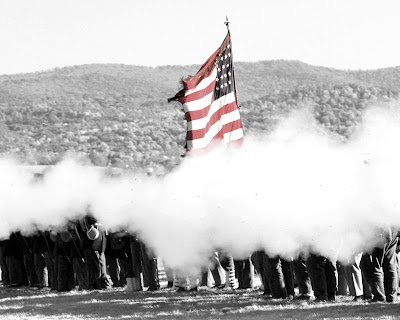 In 1926, sixty years after America’s costliest war, Mattie Brunson wrote an article in the Confederate Veteran Magazine about her father, Joseph Brunson, an artilleryman in the Pee Dee Artillery of South Carolina. She remembered as a child her father gathering the children and opening a little tin box and pulling out a cherished piece of cloth. When Joseph slowly unfolded the frayed remnants of a South Carolina flag “with broken voice, he told us of the times when he had seen it flying and took fresh courage, and of Baxter Rollins. Then we children went up and were allowed to touch with reverent hands the faded emblem, all more precious because of its wounds and tatters.” For the soldiers of the Civil War, their national, state and regimental flags were more than cloth and thread, more valuable than life itself, like a beacon reflecting from its folds the love of country, of comrades, and of home. 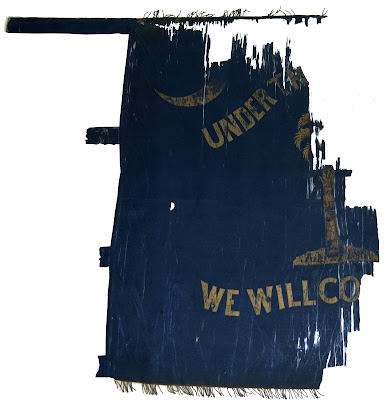 Every unit that marched onto the fields of battle across America was led by at least one flag that was purposely positioned in the center front of the regiment. The flags were the largest, brightest, and most colorful objects on the field. Through the smoke and terror of battle they acted as a guide, a symbol, and a rallying point. Many of the flags were sewn by the wives and mothers in the hometowns who sent their men off to war. Imagine standing on your town square in 1861 with farmers, laborers and merchants apprehensively enlisting, bands playing patriotic music, and town leaders making speeches. At the conclusion of the day a flag would be presented to the new regiment or company. Such was the flag of the 90th Pennsylvania Infantry that was sewn by the young ladies at the Girls High and Normal School in Philadelphia. Made of the finest silk, it was given to the regiment on Franklin Square. Another like presentation was made in Louisiana, where Idelea Collens offered a flag to the DeSoto Rifles and stated, “receive then from your mothers and sisters, from whose affections greet you, these colors woven by our feeble but reliant hands; and when this bright flag shall float before you on the battlefield, let it…inspire you with the brave and patriotic ambition of a soldier aspiring to his own, and his country’s honor and glory.” 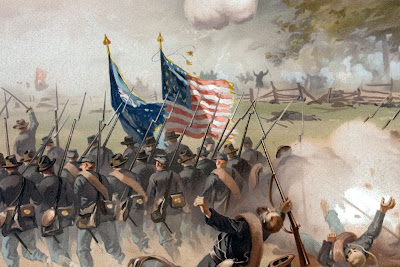 In addition to the symbolic value, a unit’s flag also served important functional purposes on a battlefield. One of the most important functions was to help tell the two armies apart. This need was readily apparent at the first major battle of the war – First Manassas or First Bull Run. Most Confederate regiments that fought in the 1861 battle carried the Stars and Bars or First National Flag of the Confederacy. This flag was rectangular, had a square blue field with seven stars and three broad stripes of red and white. Hanging on a staff on a dusty, smoke-filled field soldiers could not tell the Confederate Flag from the Union Stars and Stripes. Soldiers on both sides fired into their own men or did not fire when they should have – colorful confusion reigned. This confusion led Southerners to adopt a new flag for battle. The Confederate Battle Flag – a red square with the blue St. Andrews Cross and thirteen stars – was more distinguishable from the U.S. flag in the confusion of combat.

In the Union Army, regulations called for a large six foot by six foot flag. Easily seen, these large flags provided regimental direction and discipline. As soldiers marched across the landscape, shoulder to shoulder, with iron and lead tearing though bodies, cannons and screams echoing in their ears, all concentration would be focused on loading and firing weapons and staying aligned with their comrades on the right and left. Having the flags positioned in the center front of the line of battle provided the inspiration, alignment, and direction of movement to press forward. As the flag moved, so did the men. Sometimes the colors would move to the rear, providing another valuable functional purpose of serving as a rallying point. When a regiment retreated, soldiers looked for their flags and friends to gather. Even the words of a popular Civil War song exhorted the men to “rally on the colors boys, rally once again.” Carrying the colors for the regiment was the greatest honor for a soldier. Generally the flag bearers were selected or elected to their position by the men and officers of the unit. As one Union Colonel told his men, “the colors bear the same relation to the soldier as honesty and integrity do to manhood. It is the guiding star to victory. When in the smoke and din of battle the voice of the officer is drown by the roar of artillery, the true soldier turns his eye to the colors that he may not stray too far from it, and while it floats is conscious of his right and strength. Take it… guard it as you would the honor of the mother, wife or friend you left behind.”

Two particular flags carried at the Battle of Antietam illustrate the sacrifices made for the colors. The 125th Pennsylvania Infantry was organized just days before the battle. The morning of September 17 found this regiment advancing into the woods just north of the Dunker Church. Their color bearer was Sergeant George Simpson, a twenty-two year old Methodist farmer. Upon entering the woods, Confederates counterattacked from their front and left. Almost immediately George Simpson was shot down, “he fell, his death was instantaneous…covering the flag with his body and staining it with his life’s blood oozing from his right temple.” Private Eugene Boblitz picked up the flag until he was shot down, then Sergeant Greenland retrieved it and retreated with the regiment. That flag was given to George’s family and forty-two years later a monument was built on the battlefield by the veterans of the 125th. Carved into granite is a likeness of George Simpson holding his colors. The monument was unveiled by George’s sister Miss Annie Simpson who brought the original flag back for the ceremony. The Huntington Globe reported that the flag “will wave again over the men who made the gallant and heroic charge into the Dunker Church woods…The flag has been seen by but a few of the boys since the battle and the sight of it will revive many of the recollections and emotions of that exciting and strenuous day.” 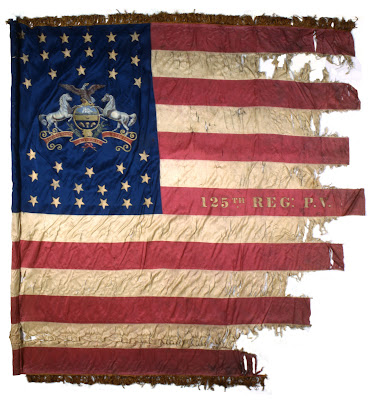 The flag of the 1st Texas Infantry was particularly special to the men. The white “lone star” on the Texas flag was made from their Colonel’s wife’s wedding dress. In addition, the flag was presented to the regiment at the Confederate Capital in Richmond by President Jefferson Davis and his wife. It was this flag that led the Texans into the cauldron of death that was the Cornfield at Antietam. As they advanced the color bearer was shot down, another soldier picked up the flag but he too was shot down. Again and again these Texans saw a man in their front killed or wounded carrying the colors. A total of nine color bearers fell beneath the Lone Star flag of the 1st Texas. The regiment would lose 82% of their soldiers killed and wounded. Their greatest loss was their flag, dropped in the din and destruction in the corn. The Union soldier who found it said “that thirteen men lay dead within touch of it and the body of one of the dead lay stretched across it.” The Texans, like the Pennsylvanians would do anything, including giving their lives to save their colors and all that they represented. 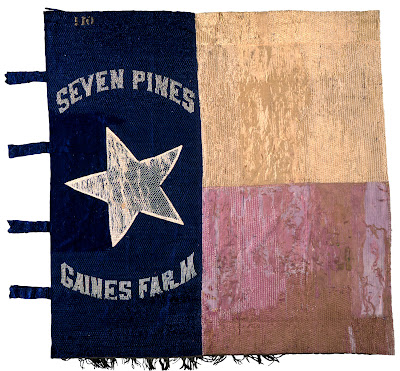 Abolitionist Henry Ward Beecher wrote during the war about what his flag represented. “A thoughtful mind, when it sees a nation’s flag, sees not the flag only, but the nation itself; and whatever may be its symbols, it insignia, he reads chiefly in the flag the government, the principles, the truths, and the history which belongs to the nation that sets it forth.” Thankfully our nation’s flag was carried forth through four years of horrific struggle to reunification. As Jerome Watrous, a veteran of the 6th Wisconsin Infantry reflected, “We realized after Appomattox that the lives of thousands of our comrades who had died on battle fields had in a way been woven into our colors. Then we realized that it was equally true that we have been woven into the colors. It was not only our flag, the flag of our country, but that we were part of it. We had helped to cleanse it; we had given the new-born nation a new and clean flag. The old, faded, torn, furled flags are sacred remnants of the new-born nation’s untarnished emblem.”

Back in South Carolina when Mattie Brunson heard her father’s stories about his flag she asked, “Who was Baxter Rollins?” Private Rollins, answered Joseph, was the sixteen-year-old color bearer for the battery. While serving the battery at Antietam, a piece of artillery shell knocked him down and mortally wounded him just as he fired the cannon. The wheels of the gun rolled over and crushed his feet. Crippled and dying, the men tried to carry Baxter to the rear. With tears in his eyes he said, “Don’t take me to the rear boys, carry me to my flag. I know I must die, and I want to die by my flag.”
Posted by Unknown at 6:25 AM