Seventy-fifth Anniversary of the Battle of Antietam, September 17, 1937
The Last Great Reunion at Antietam

Memories of what it was like during the Battle of Antietam at Sharpsburg Maryland were still vivid to some of the participants who gathered for this historic reunion in 1937.   Approximately fifty Civil War veterans and a crowd of thirty-five thousand gathered at the battlefield to hear the President of the United States, Franklin D. Roosevelt,  give a stirring speech and to view a re-enactment of the battle.  From the grandstand erected overlooking the famous Bloody Lane, visitors were able to view one thousand National Guardsmen simulate combat.  Units came from Maryland, Pennsylvania, the District of Columbia, as well as active army soldiers from Fort Belvoir, Virginia. Major General Milton A. Reckord, Commander of the Twenty-ninth Division was overall commander of the program.  Union solders were dressed in barrack caps, O.D. shirts and blue denim; Confederates appeared  in campaign hats and khaki.  Action started with the "Confederates" waiting in the road for the "Union" attack.  Upon being attacked, the "Confederates"  retreated  and then counterattacked.  The narrator, Major Joseph W. Byron, Retired, described the action which in turn was broadcasted on a local radio station in Hagerstown. Major Byron planned the entire military program for the Antietam Celebration Commission.  The Commission was represented by Senators Tydings and Radcliffe of Maryland, Senator Harry Flood Byrd, of Virginia, Representative David J. Lewis of Maryland, and Representative Charles A. Plumly of Vermont.
Regular Army engineers simulated the noise of battle.  Smoke bombs burst in the sky, and two wooden farm buildings erected on the battlefield were put on fire and burned to the ground.  One interesting scene was a replica of a wooden Confederate battery that blew up from a charge of explosive planted underneath it as though it had been struck by a Union shell.
Colonel John Oehmann,  District Building Inspector and Head of the District of Columbia National Guard portrayed General Robert E. Lee.  Colonel John D. Markey of Frederick Maryland, Commander of the 1st Maryland Regiment,  portrayed General George B. McClellan.  Twenty-two spectators were treated for injuries; most of whom had fainted from fatigue or perhaps from excitement.  They were treated by the 104th Medical Regiment of Baltimore. 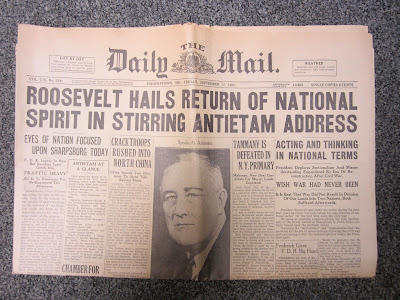 Following the battle, the assembled crowd stood for the playing of the National Anthem as Boy Scouts marched in front of the grandstand  with the flags of  30 states representing the homes of the soldiers who were in the battle.   The President received a memento of the fighting; a brightly polished wood with a bullet imbedded in it chopped from a tree near Burnside's Bridge.
Civil War  veterans from Maryland and Pennsylvania in attendance included George Leighty, from Hancock, Maryland,  one of  two remaining veterans of Washington County.   He served with the 3rd  Regiment, Maryland Infantry.  Other area veterans in attendance were  F.L. Mullinix from Westminster, Maryland who served with 7th Maryland Regiment, and Edward Flickinger, Dry Run, Pennsylvania from the  11th Pennsylvania Regiment.  Flickinger was the  last survivor of the Civil War from Franklin County.
`              The day before the program, September 16, twenty-one veterans toured the battlefield and observed that the corn was "more mature" than what they remembered seventy-five years ago.  Veterans were also part of a special dinner held in their honor at the Hotel Alexander Ballroom in Hagerstown, Maryland.  Twenty-four veterans, the Governors of two states and representatives of governors were guests.
In addition to the program on September 17,   a huge exposition had been held at the Washington County Fairgrounds beginning on September 4.  "On the Wings of Time" was a pageant that  featured a cast of two thousand.  Episodes of history over the past 200 years were depicted twice a night.  The oldest and the newest railway equipment were brought in on a special spur of track.  Airplane and blimp demonstrations appeared overhead. An estimated sixty thousand spectators viewed the pageant during its fourteen-day run.
All of the programs were well publicized through the Associated Press Wire Service and people from throughout the United States became aware of the rich historical heritage found in the surrounding tri-state area.  Coming on the heels of the great depression, it is worthy to note the pride that residents had in celebrating these historical events.

President Roosevelt closed his speech that day with words that placed focus on the importance of a united country.  His words bear wisdom today as they did in 1937. He stated "In the presence of the spirits of those who fell on this field--Union soldiers and Confederate soldiers--we can believe that they rejoice with us in the unity of understanding which is so increasingly ours today.  They urge us on in all we do to foster that unity in the spirit of tolerance, of willingness to help our neighbor, and of faith in the destiny of the United States.”